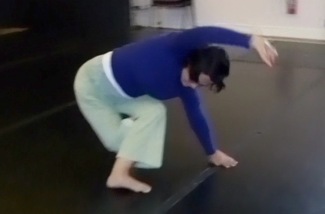 A multi-lingual solo investigating the processing of violence in the body.

Supported by the Arts Council Wales and Theatrau Sir Gâr, in collaboration with Ioan Hefin and Eleanor Shaw. 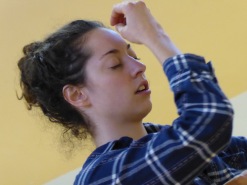 Rituals of Faith and Imagination (2013)

“The audience remained transfixed, focused within your channeled energy…

…there is something about you, Lucy, that draws away from the physical environment and draws us into you.”

Rituals of Faith and Imagination drew on ritual, martial art and the gridding of words on the body and in space.  It took inspiration from a training period in south India in the martial art of kaḷarippayaṟṟ˘.

Lucy was Y Ffwrnes Theatre’s first Adopta artist, which made this solo possible.

The solo was last performed at Wales Dance Platform 2014 at Wales Millennium Centre.

scripted improvised dance on water and ice, how they live in us, we in them 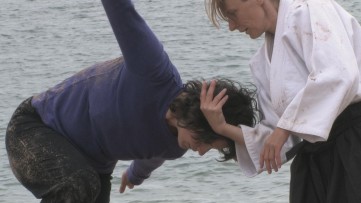 a film exploring the meeting place of dance, aikido and the Welsh coast 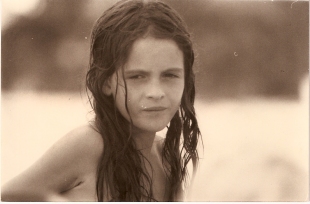 bilingual improvised dance on colour, memory and the geography of belonging

Click here to watch a short study of inspirations for the solo (2 minutes).

…The balance is never made.

Yet in the night your eyes and mine 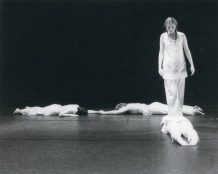 in collaboration with Maybelline Quenneson,

Lucy May Constantini started exploring movement in a vaguely formal context when she was two years old, and has been following that calling ever since.  She has worked extensively in dance and theatre since 1997 as a performer, choreographer, movement director and teacher, mostly in the UK, but also in Europe, Asia and South Africa.  She is a passionate explorer of improvisation, with a focus on Contact Improvisation which she first learnt from Laurie Booth while at Laban in 1997.  She has studied with some of the pioneers of the form, including Steve Paxton, Nancy Stark Smith and Kirstie Simson, who continue to inspire her.  Lucy has a long-standing interest in martial arts and body practices and how these relate to dance-making.  Over the years, her studies in these forms have included kaḷarippayaṟṟ˘, aikido, wing chun kung-fu, Thai massage and yoga.

Lucy has also worked extensively as a movement director in theatre, professionally and for final year drama school productions, and performs in both dance and theatre.

Views from the last few days rest-ish. And now on the long journey back to the cold (though probably to slightly smaller spiders). #godsowncountry #kerala #itinerantscholar